The French Pillar of Jebel Misht

The 1000 m high South Face of Jebel Misht is considered as the highest rock face of the entire Arabian peninsula.

A freestanding bastion of excellent metamorphic limestone. The 4 km wide face is defined by a prominent pillar in the central part – above it runs the classic French Pillar. A breathtaking line with a historical aura – according to Toby Foord-Kelcey it is a desert version of The Nose on El Capitan and the Walker Spur on Grandes Jorasses. The three routes certainly have different characters, but are of similar scale.

It is the beginning of December, and the heat is still scorching in greater parts of Oman. During the day, we prefer to move in the shade. Climbing? Best done early in the morning and late in the afternoon. Two things come to my mind when I think about climbing a 1000 m high shadowless South Face under these conditions: Fried chicken. And the question of how to drag all the water through the route. I remember the attempt to climb the Great Spitzkoppe in Namibia a few years ago, where we mercilessly failed due to the great heat.

Now it is Jebel Misht. Okay, we’ve learned our lessons. It is clear to us, that water supply is certainly the crucial point for a successful ascent. We plan on decending via the north side and have set up a water depot on the way down in advance – it is our mental finish line. We also bivouacked at the beginning of the climb and brought an extra ration of water for the evening/morning in order to start the climb optimally hydrated. For the two planned days in the route incl. descent via north side up to the water depot, we counted on 3.5 litres per person in total. Not that much water, but it turned out to be okay. Of course, there are also shady big walls in Oman, for example on Jebel Kawr. But the ascent of this perfect postcard dream line was very tempting for us. We were keen to go. This classic is simply THE line in the Arabian world. 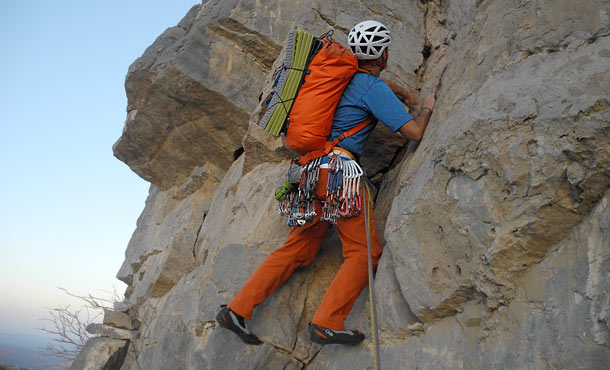 At this point I would briefly like to touch upon the route. We used three different topos for our ascent. In our opinion the best route description is the one by Toby Foord-Kelcey (02.2007) in combination with the topo of Laliderer (11.2013). Here are some updates and corrections which refer to these two sources:

1. The beginning of the climb is marked with a big cairn. Next to it is a save bivouac which can sleep two people.

2. The second part of the 2nd pitch asks to climb a series of more or less loose flakes, which can be avoided more safely by climbing steeply on the left.

3. Above the heart section you come to the food stash of the first ascentionists. Shortly afterwards there is a shady place for two climbers behind a boulder, where you can hide from the sun if necessary.

4. The traverse to the headwall leads to an obvious pinnacle/gendarm, which lies in the logical line of the route. During the traverse one crosses the lower part of the crack of Make Love Not War, which is not visible from the ridge.

5. The entire headwall with its crux pitch and further route guidance can be clearly seen from this pinnacle.

6. There are three anchors in the headwall which have one bolt each.

7. The left traverse after the 8th climbing section to the further corner is about 12 m long. The corner becomes visible after traversing the ledge.

8. The pitches from this corner on have some unpleasant moves.

9. There is a antenna with shadey solar panel on top of the summit.

10. We started the descent on the north side relatively in the central part. Once we reached the steep rock steps, we turned orographically to the right (some cairns here), until we had overcome the steepest sections. Afterwards we followed on one of the rocky ridges down to the wadi. 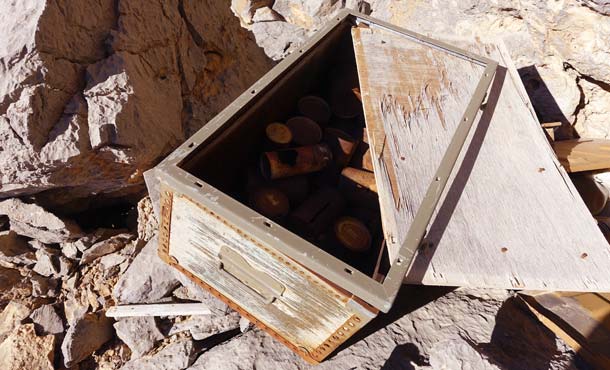 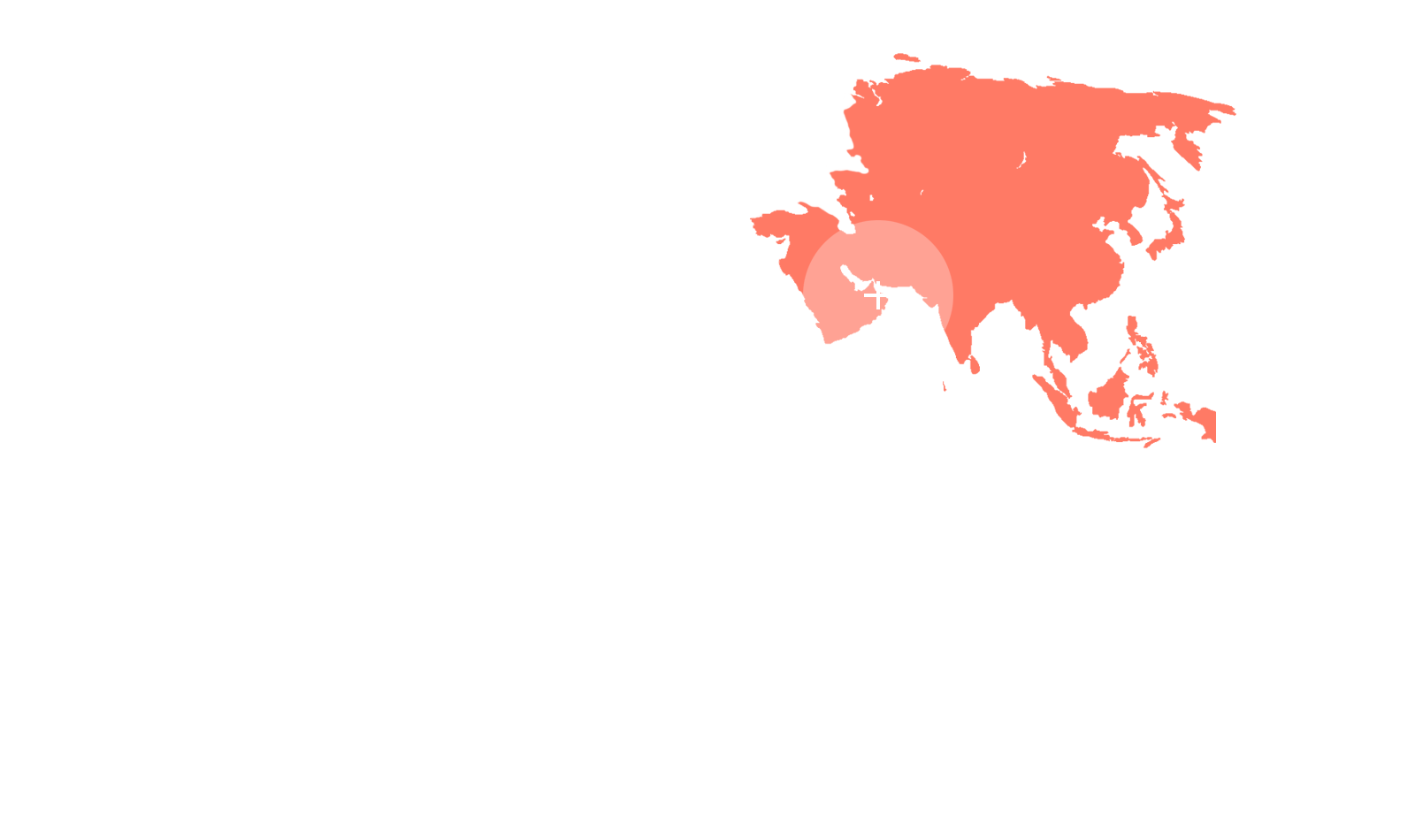 R. Renaud (France) and friends in 1979. They used siege tactics with fixed ropes and helicopter support on their 20-day ascent.

Free onsight ascent on 4 – 5 December 2018, together with Kirsten Steimel. 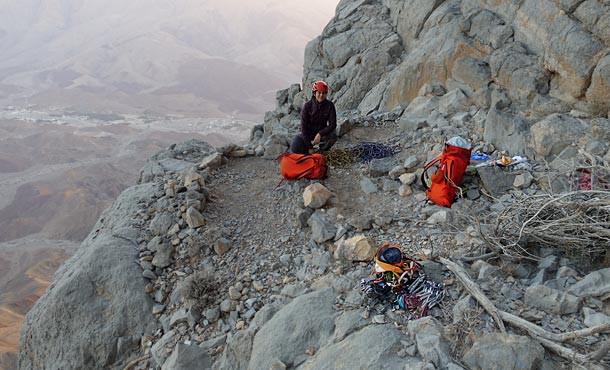 C4-Camalot #0.1–3 (0.3–0.75 double), 2 sets of Stoppers, slings, 50 m double rope.
Double ropes are definitely recommended in this rough terrain. With the given route guidance in mind it doesn't make much sense to climb the full length of the few 60 m pitches anyway. Good anchors can easily set up halfway along the long pitches.

Due to its size and its exposure Jebel Misht is certainly not a preferable mountain for an emergency. Keep in mind that there is no mountain rescue in Oman. Therefore emergency scenarios should be well considered in advance. 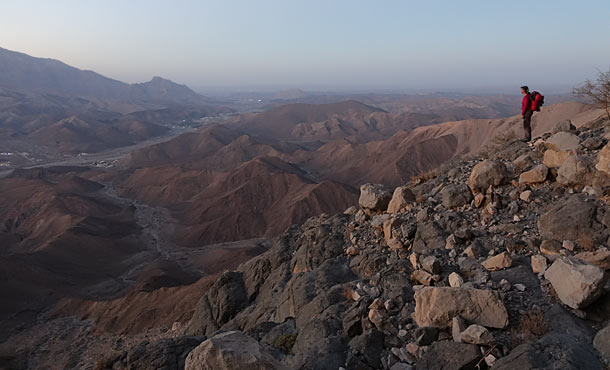