On tour with: Dirk Emrich

“We almost made it!” Almost, if … well, a few things went wrong. The bivouac hut made the beginning, from which we’ve actually planed to start. Five minutes away from the route, this hut would be an ideal overnight accomodation for the forthcoming long climbing route. However – at this time the hut was still to repair in the valley and should be flown on the following weekend by a helicopter to its appropriate place.

So we started from the Salbithut in the early morning hours and had a two hours approach to the route – extended by another half an hour. Because of the darkness, we couldn’t find our way to the entrance of the chain way. Then we spent one more hour finding our way at the third tower. At the end, the reason for our unplanned break gave the weather reversal, which reached us behind the fourth tower.

An english roped party behind us preferred to break off the route during the rain. After the rainy clouds finally disappeared from the summit of Salbitschijen, the weather suddenly became sunny again. We waited a while until the granite dried its smudgy lichen cushions, because the next pitch ahead of us was a steep friction slab. Further down in the valley we saw the Englishmen walking back to the hut in most beautiful sunshine – poor fellows we thought. Then we continued our climb. One hour and one tower later, another bad weather front behind the fifth tower finally forced us to abort of the whole climb. 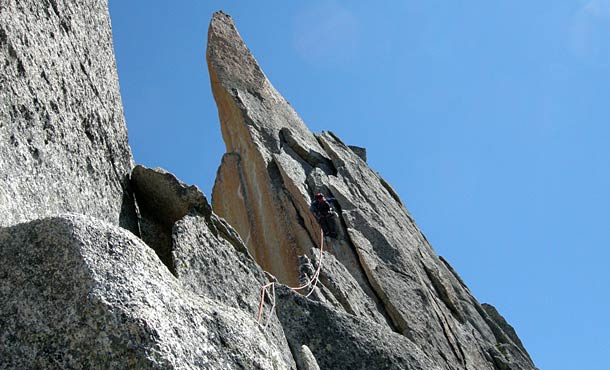 While rappeling down to the col of the last tower our twin ropes unfortunately got caught and we needed a long time in order to release them. In the meantime the darkness caught up. We quickly agreed that roping down in this terrain would be very dangerous now and decided to bivouac in the col. Well equiped for this project – we both had a rain jacket and still enough to drink – we looked out for a small ledge, where we were protected against the rain and falling rocks. Because of this ledge we spent the never ending night quite uncomfortably sitting and without any sleep.

As the sun rose finally, we where worn out from the long night. We slowly moved our bones and realized that we wouldn’t make it to the summit anymore. Totally over tired we gave our best to come down the mountain well. It was our plan to rope down the col in order to reach down the chain way again. That finally succeeded and at noon we both ran into the Salbithut quite tired. Thus the following night in a warm bed was safe for us.

Afterwards I can say that – although we didn’t reach the summit – it was a beautiful route and sometimes I remember, how it would probably have been, if we had continued climbing up to the summit on the second day. 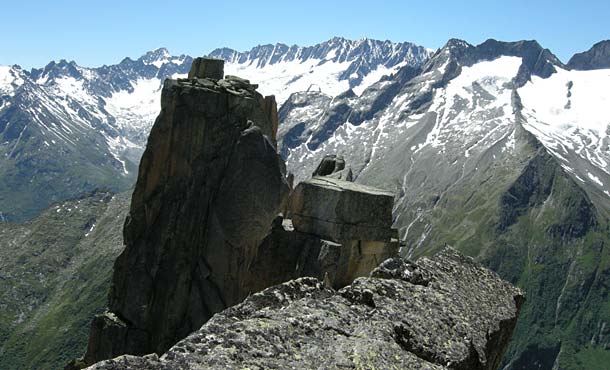 In June 2011 we have tried to climb the route again. This time we climbed the whole west ridge in about 15 hours. For 32 pitches it took us 14 minutes in average per person and pitch – certainly improvable, but not bad for a self-protected 1000 m climb. 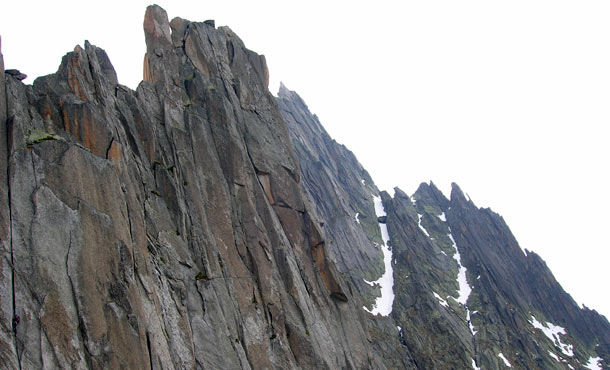 Louis-Maurice Henchoz and Berthe Favre in 1948

June to July because of the long daylight

All belay anchors are properly bolted, the pitches have to be protected with mobile devices. Some bolts and pitons are available, sometimes you can find very old wooden wedges. 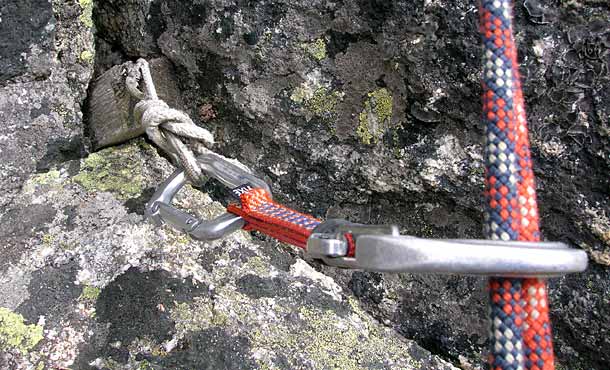 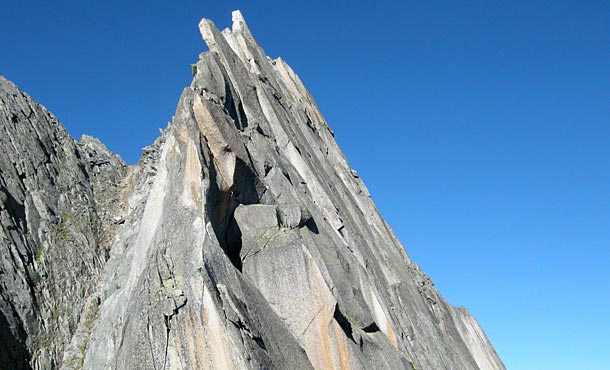