The monolith with its devilish face.

For Spaniards Naranjo (its real name is Picu Urriellu) can be compared to the Eiger or El Capitan – a myth with a compelling story, many tragedies and a long tradition of climbing.

This mountain offers the best ambience for adventure, and is a great playground for a variety of climbing styles: whether technical climbing (which is very popular for Spaniards), multi-day winter mountaineering, free solos or hard free climbing. History is still written on this mountain. The beginning was made in 1904 by ​​Pedro Pidal and Gregorio Pérez, when they reached the top without a single piton. 1906 the German Gustav Schulze followed, and climbed the east face solo in 3 hours.

The winter ascents in the 60s were initially rather fatal: the first roped party was killed by an outbreak of the entire halting-place, the second roped party froze to death after 11 days in the wall. In the winter of 1983 Miguel Ángel Diez and José Luis Garcia Gallego spent 68 days non-stop in the wall (world record) and opened Sueños de invierno, the first A5-route in Spain. Since than the media has been pursuing the climbs with great interest.

In 1962 the roped party Rabadá-Navarro found a new line through the steep western face within two days, and finally started the beginning of the free climbing era. They were also the first who used Buriles for protection – bad rivets pins that still exist in some routes today. In 2009, the brothers Iker and Eneko Pou – whos pivot is always Naranjo de Bulnes – opened the hardest route in the world, Orbayu, 8c+/9a in the 500 m high west face. 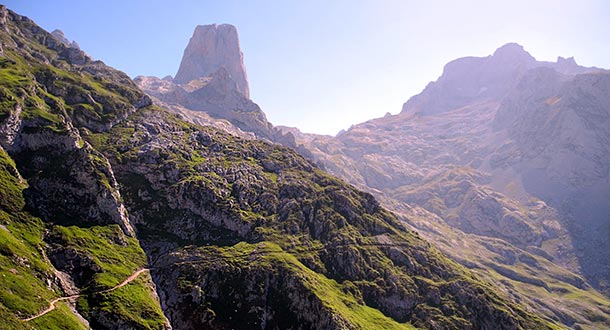 The distinctive karst mountains with its countless dolines and the steep Naranjo as a trademark is the first choice for alpine climbing in Spain, and has a good reputation amongst the Spaniards. It is said that you have to stand on top of the Naranjo de Bulnes to be a real climber. Luckily we already reached the summit on our second climbing day. After that it was much easier to come into contact and exchange information with the Spanish climbers. We had a very nice time here. Now we know how steep and rugged those mountains really are. We have learned that it is always the hardest bit shortly before reaching the goal. And we experienced some unforgettable moments in the wall, when suddenly two golden eagles majestically whizzed by right behind us. 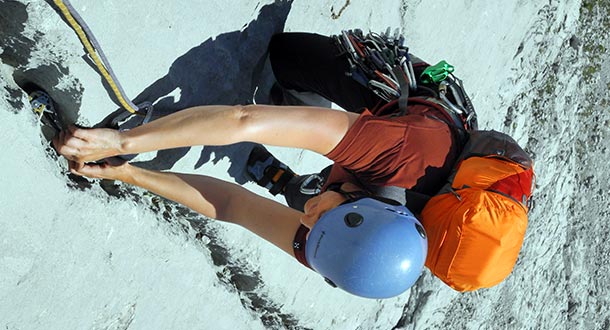 The striking Naranjo – one of the few monoliths worldwide – fascinates, its steep walls are compact and extremely exposed. Especially the experience of the sucking depth is unique. But it isn’t the only mountain in the Picos, which is worth climbing: there are numerous peaks with beautiful views. If the weather is good, you can take a look all the way to the Atlantic. Otherwise, you often look down to this typical carpet of clouds and you literally float above the clouds – a heavenly feeling. 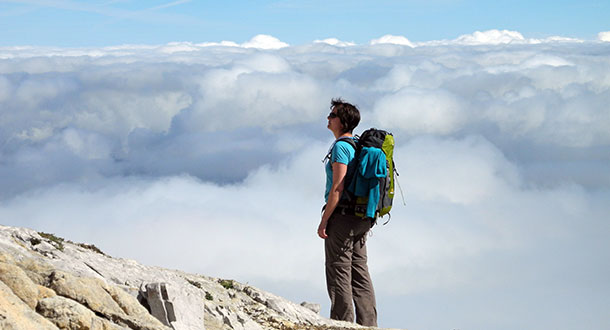 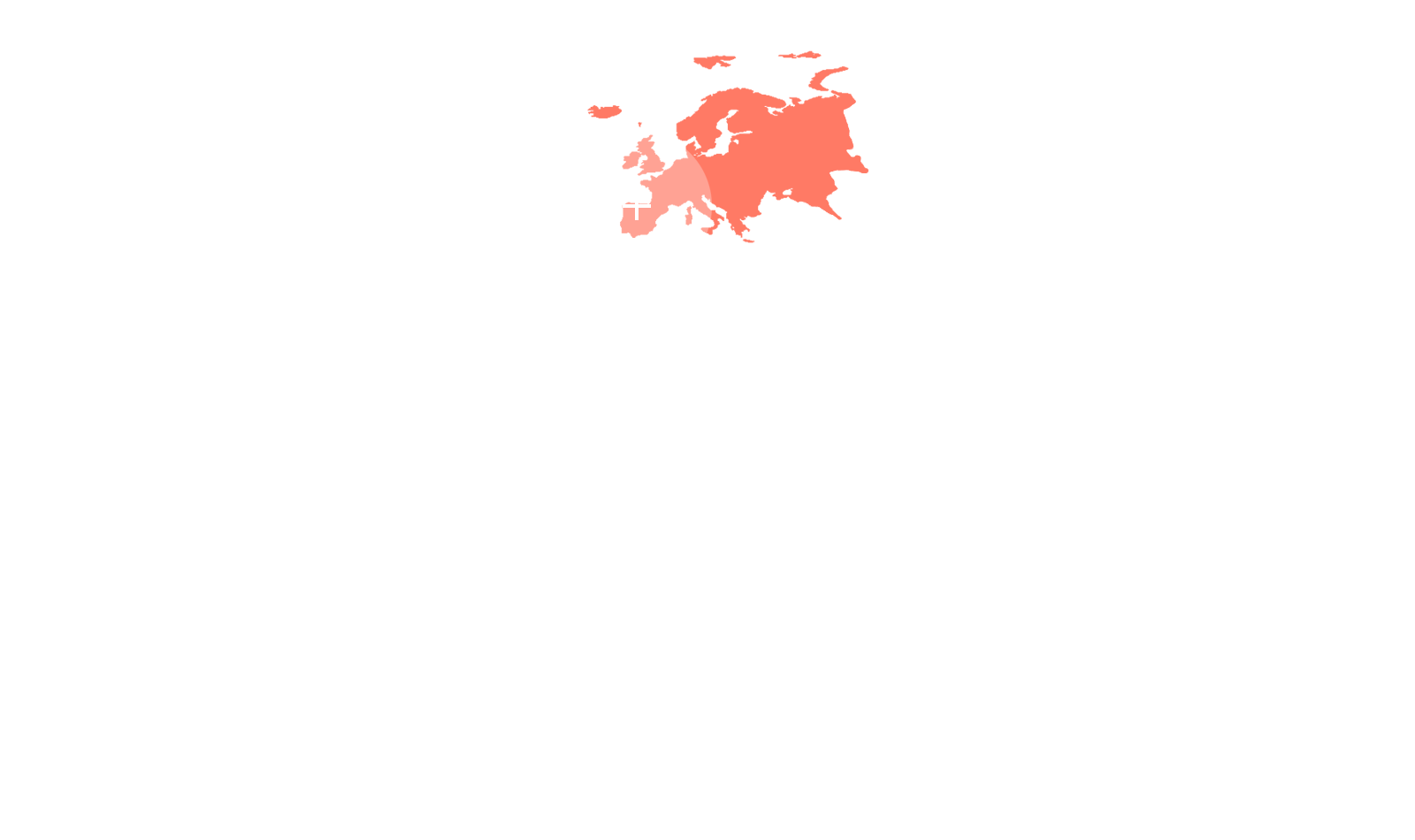 For accommodation in the Refugio you will need a silk inlet, blankets are provided. There are also excellent bivouac sites nearby the Refugios and in many other places. The accommodations in the central massif of the Picos are: 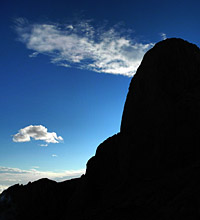 Planning a climbing trip to this area without the knowledge of Spanish language isn’t simple. There isn’t so much information about the area, and most of the tourists stick to the Cares gorge (between Poncebos and Cain) for which the Picos are well known. The National Park is hardly promoted by the government, which likes to preserve the wilderness.
There are currently no up-to-date climbing topos, the last Spanish topo selection of Miguel Angel Adrados is dated from the year 2005. But there are still many information available at the Refugios.

The character of the climbing is solid trad climbing in very exposed terrain. In this compact, with runnels eroded limestone, the protection is complicated and very seriously because of bad pitons. There are often long runouts with possible falls up to 20 meters. A stable mental constitution is strongly recommended. In the last few years there have been some gentle route renovations – the protection there is very good, though we found it was set partially illogical.

» Area overview of the most interesting mountains in the Picos (PDF: 551 KB)

Very tasty is a combination of cheese with quince jelly and Rioja red wine. The regional Queso de Cabrales (mold with some cheese) takes some time to get used to. In the Refugios there isn’t a single dinner meal without Chorizo ​​sausage – but it is always tasty after a long day on the mountain! 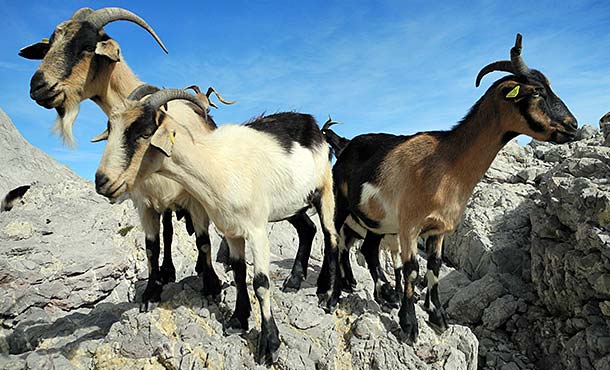